Students will examine and discuss the Altar Screen, then collaboratively create a timeline or note on an existing timeline the important historical and political events of northern New Mexico and southern Colorado around the time this screen would have been created and displayed. Students will investigate the significance of cultural works of art relative to the events of the time. 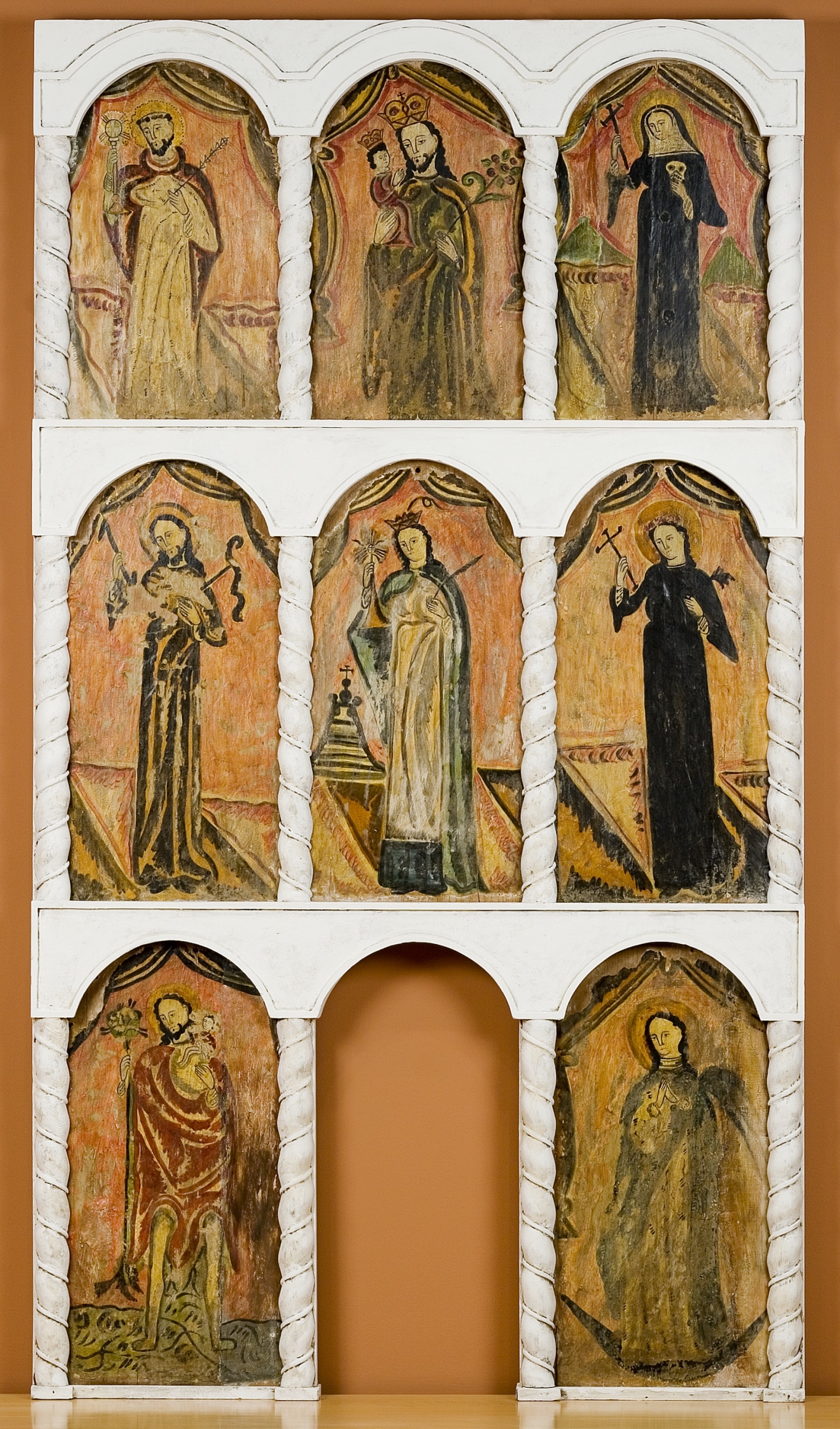 Molleno worked as an artist in the Chimayó area of northern New Mexico from approximately 1800–1845. He is referred to as a santero—an artist who creates santos, or holy images. A scholar, E. Boyd, discovered a painting of Saint Francis with an inscription on the reverse that reads "San Francisco pitido [sic] el ano 1845 por el escultor Molleno.” “Saint Francis painted in the year 1845 by the sculptor Molleno.” Based on this inscription, art historians are able to attribute other works with matching characteristics to Molleno. During his career, Molleno developed three different styles of painting, referred to as his early, middle, and late periods. He moved from creating somewhat realistic figures to more simplified, abstract figures.

Altar screens were generally placed behind the altar in a church, or on the side walls. The painted wooden panels within the frame, called retablos, depict images of Catholic saints, the Christ Child, and the Virgin Mary. The wooden frame on this screen was designed and created by former Denver Art Museum curator Robert Stroessner, in order to show how the panels would have been displayed in a Catholic church in New Mexico. Santos, the holy images portrayed in the individual panels, served as devotional figures that played an important role in church, community, and family rituals. Saints provided a way for individuals to communicate with God. They are identified by visual attributes, or symbols that represent important aspects of their lives (see examples the "Details” section). Santos also served an educational purpose. The figures portrayed here would have been familiar to most of the church-going population in New Mexico during this time. Many of these people could not read, so images were used to tell stories, instead of the written word.

Saint Joseph and the Christ Child

The panel in the center of the top row shows Saint Joseph holding the Christ Child in his right arm, and holding a flowering staff in his left hand.

The Virgin Mary is located on the right side of the bottom row. She stands on a crescent moon wearing a blue cloak—two visual attributes associated with her.

Saint Christopher, the patron saint of travelers, can be found in the bottom left panel. A child once asked Christopher to carry him across a river. As they made their way across, the child grew increasingly heavy and Christopher struggled. When they reached the other side, the child revealed himself as Christ, and told Christopher that he had just carried the weight of the world on his shoulders. Christopher planted his staff by the edge of the river where it became a palm tree. He is recognized by the staff he carries in his right hand and the Christ Child in his left.

Saint Barbara can be seen in the center panel with a tower in the background. The tower represents a story in which her jealous father locked her in a tower, claiming she was too beautiful to be seen.

The eyes of the figures are simplified. A series of semi-circular lines make up the outline of each eye, and a dark dot is used to form the pupil.

A thin horizontal stripe of paint is crossed by short vertical lines to form the mouth. The lips, along with the eyes, are characteristic of Molleno’s more abstracted style.

The hands of the figures are not realistic. The fingers are long, and the thumbs are distended and form awkward angles with the rest of the hand. Notice the disproportionate size of the hands on the image of the Christ Child.

The tables and draperies are stylized and look like triangular chili peppers. An earlier name given to Molleno—the “Chili Painter”—refers to his tendency to create these chili pepper designs.

The figures’ heads are turned slightly to the side, so that we are presented with a ¾ view of the face, with a portion of the right side hidden. This position is characteristic of Molleno’s style.

Molleno often gave attention to the nose and beard of the figures. Notice here the dark outline around the figures’ noses, and the solid beards on the male figures.

The empty frame on the bottom row would probably have held a sculpture of a saint, called a bulto. Bultos were also made by santeros.