Students will identify the issues and events involving American Indians as represented on Wheel. They will research one of the events and develop a presentation of their findings. 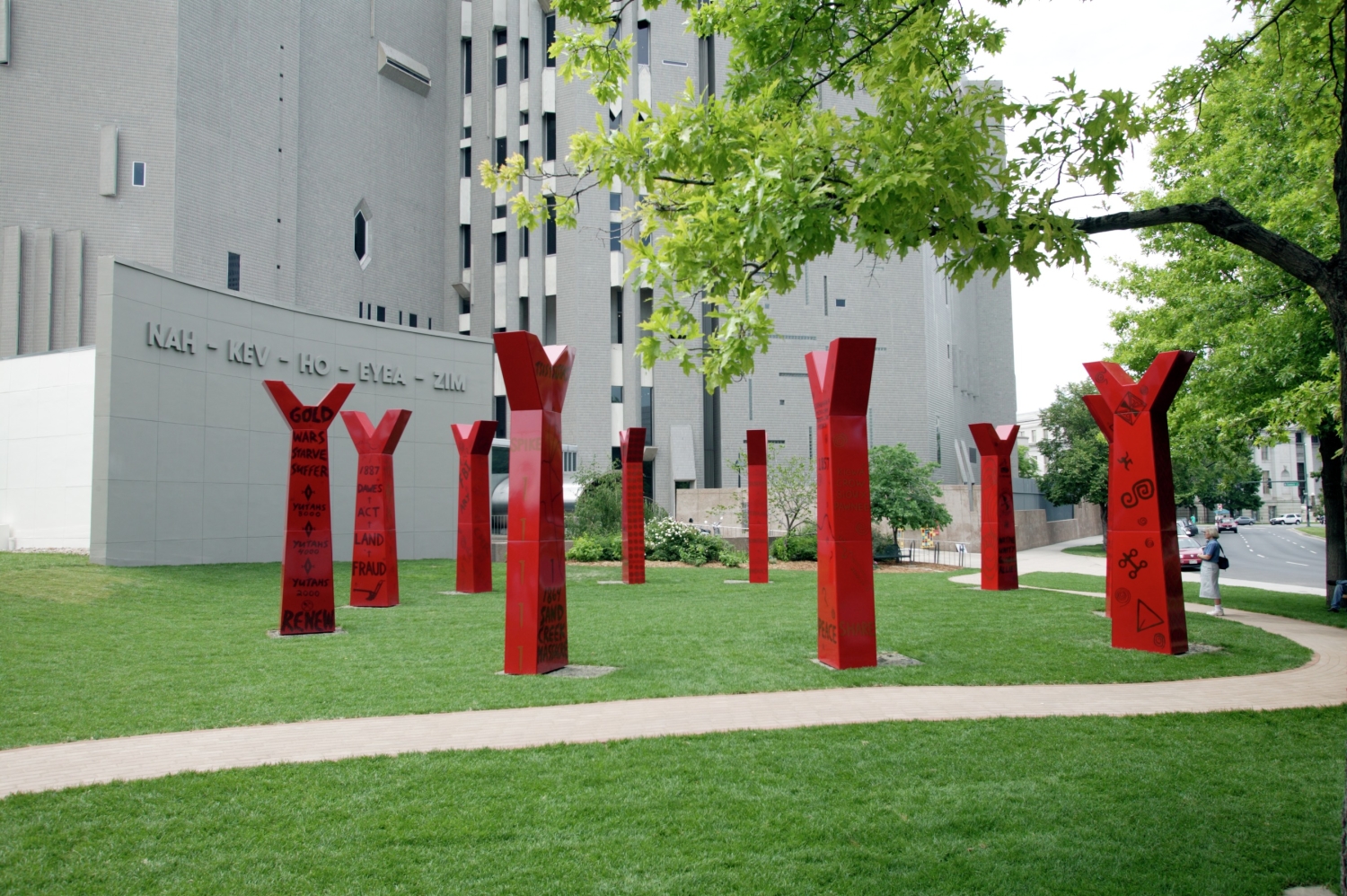 Edgar Heap of Birds is an accomplished Cheyenne-Arapaho artist who works in a variety of media—drawing, painting, printmaking—and is known for his public art interventions and installations, including Wheel. Much of his artwork is about refocusing how American Indian culture and history is viewed, perceived, and understood.

Born in 1954, Heap of Birds holds a Bachelor of Fine Arts (BFA) from the University of Kansas and a Masters of Fine Arts (MFA) from Tyler School of Art (Temple University, Philadelphia). He also did graduate work at the Royal College of Art in London. He is on the faculty of Oklahoma University with a joint appointment in Native American Studies and Fine Arts.

Wheel was created specifically for its site at the Denver Art Museum and is rich in symbolism. Several American Indian artists were invited to submit proposals for a major public artwork to be located next to the museum’s North Building entrance. Use of the building’s curved wall was a key factor in Heap of Birds’s proposal—on it, in raised letters, he placed the Cheyenne words “nah-kev-ho-eyea-zim,” which mean “we are always returning back home again.”

Heap of Birds wants Wheel to be a gathering place for the community. The circle form is based on the Big Horn Medicine Wheel, a sacred site in northern Wyoming, as well as the circular form of a traditional Plains Indian Sun Dance lodge. The ten forked poles, or trees, are aligned with the summer solstice—on June 21st, the sun rises in an opening to the east between the first and last poles. Each tree is covered with words and drawings that recount different events in the history of American Indian peoples in Colorado and the surrounding region, from conflict over resources to global cooperation among indigenous peoples.

Bison hoof prints and outlines of hands are among the many sketches of actual objects that Heap of Birds included on the poles, along with graphic design elements like the double spiral taken from ancestral Puebloan cultures.

While most of the imagery on the trees refers to historical events, some is specific to Heaps of Birds and his family. On the tenth tree, the magpies flying upward represent the name “Heap of Birds.”

Although words are used literally as text that describes historic events, they also serve as design elements. Heap of Birds chose varied styles of lettering to add mood and visual interest.

Heap of Birds used three styles of forked tree forms in Wheel, inspired in part by a tree that once stood at the site. The forms also refer to the forked poles that hold up a Sun Dance lodge. The artist’s original drawings show twelve trees in the circle, but the final artwork has only ten. According to Heap of Birds, Wheel is his creative expression, and he omitted two poles so that it would not be read as religious.