Students will pretend they are insects or frogs, jumping from lily pad to lily pad as they explore the world in Monet’s painting. 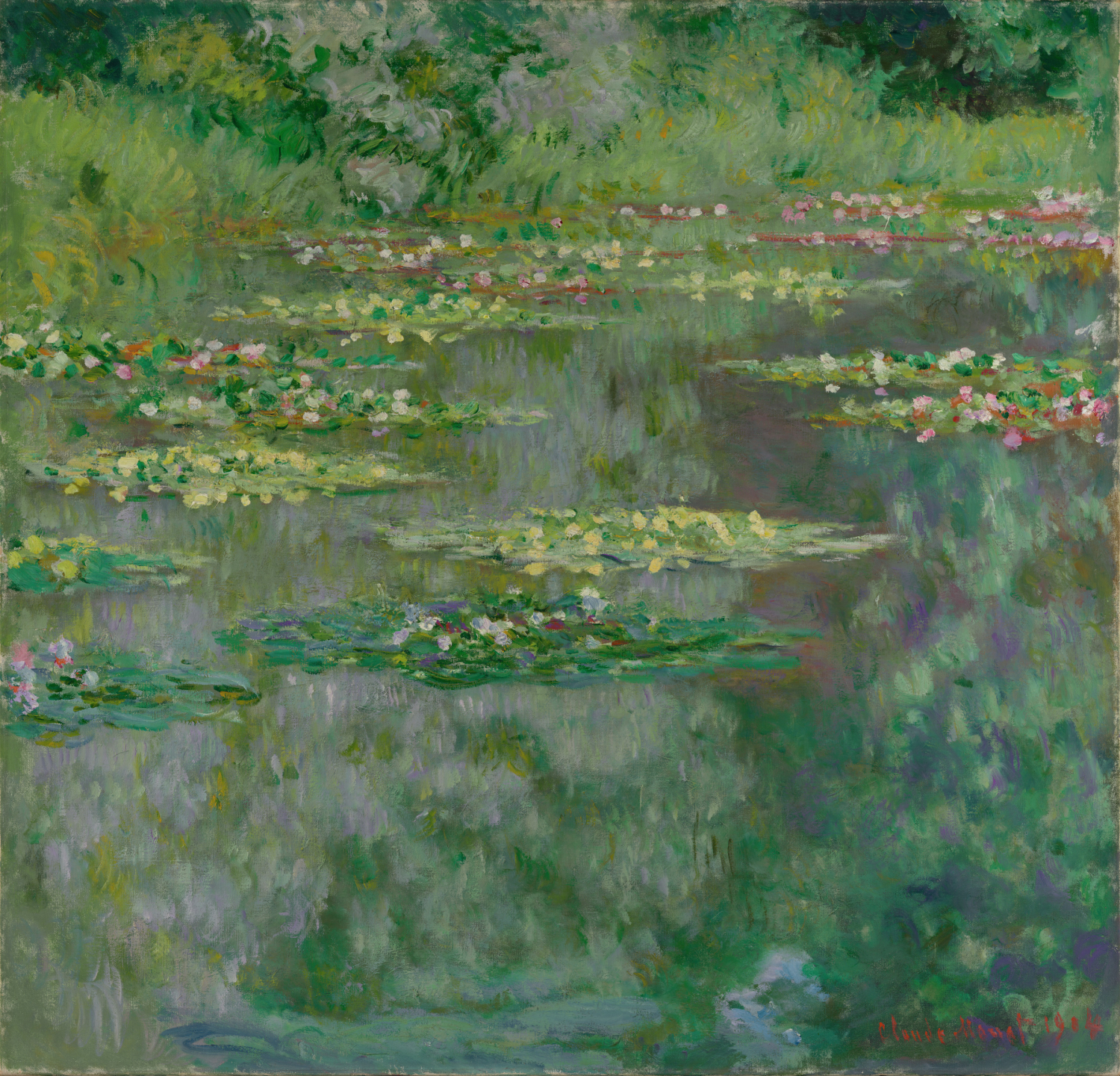 The most widely known French Impressionist, Claude Monet [moe-NAY] was born in Paris and grew up on the Normandy coast. His father was a wholesale grocer, and after his mother died when he was 17, an aunt encouraged Monet in his efforts to become an artist. With a local reputation as a caricaturist, he attracted the interest of landscape painter Eugene Boudin [boh-DAN], who introduced Monet to plein-air painting. Plein-air is French for “open air” and refers to paintings created outdoors.

In the 1860s, Monet joined a group of young artists who began to challenge the rules for how good paintings were made. These young artists had so much trouble getting their work exhibited that they created their own independent exhibition, which yielded only ridicule and a sarcastic label. That label—derived from Monet’s painting, Impression, Sunrise of 1874—stuck, and the group of artists became known as the “Impressionists.” Impressionists were initially criticized for their unworthy subjects, unrealistic colors, garish color combinations, and loose, seemingly unfinished brushwork.

Like many other Impressionists, Monet had little success in his early years. He most often chose to paint landscapes and leisure activities—everyday activities that were considered to be unworthy subjects for art, compared to the highly respected religious and mythological subjects. With his paintings, Monet strove to capture a fleeting moment by rendering the nuances of light and color in nature. He wanted to depict the feeling or sensation of a scene, rather than the individual objects that existed within the composition. As the public opinion of Impressionism became more favorable in the mid-1880s, Monet’s paintings began to sell well and by the turn of the century, he was one of the world’s wealthiest artists.

In 1883, Monet, his second wife Alice Hoschede, and her eight kids moved to Giverny [GEE-ver-KNEE], a town about an hour outside Paris where he lived the rest of his life. “These landscapes of water and reflections have become an obsession. They are beyond the power of an old man, and I nevertheless want to succeed in rendering what I perceive…,” said Monet of his garden at Giverny, where he painted many versions of the The Water Lily Pond. An inspired gardener and a perfectionist, Monet designed his garden like he was changing the costume on a model or arranging a still-life—to look exactly as he wanted to paint it. He built an arched bridge based on Japanese designs across one section of the pond. He also got permission to control the incoming water flow, creating the right conditions to grow a new hybrid water lily that would be hardy enough for the French climate. He orchestrated color and plant arrangement (including irises and weeping willows) around the edge of his pond for the best reflections. He pruned dead water lily blossoms and even went so far as to trim the pads. He even paid to blacktop the road that crossed his property because he didn’t like the dust that settled on his plants.

Monet would work on a painting for half an hour and as the light changed, he’d switch out the canvas he was working on for another, frantically trying to find the one that best matched what he was currently seeing. He complained, “It’s a continual torture to me!” Monet worked on a continuous series of water lily paintings from the late 1890s to 1910. About three hundred of his paintings are of his floral and water gardens. Ever self-critical, he was known to slash his paintings with a knife when he feared he had overworked them. Only four water lily paintings from 1904 survived his rampages—this painting is one of them.

Monet started out painting broader views of his pond, but increasingly narrowed his focus downward until he was only showing the water’s surface. This painting was done somewhere in between, showing no sky and only a bit of the growth around the pond’s edge.

In his water lily paintings, Monet often rejected the painter’s usual tools, like lines of perspective. However, you can still see the recession of space, mainly because of the diminishing scale of the clusters of flowers—the further away the flowers, the smaller they appear.

A large portion of the painting shows the surface of the water. Monet paints both the actual flower clusters on the water’s surface as well as the changing effects of light reflected in the water. For Monet, the reflection was really the subject of his painting. He said, “The water flowers are far from being the whole scene; really, they are just the accompaniment. The essence of the motif is the mirror of water whose appearance alters at every moment.”

Monet worked his canvases over and over, adding many layers of paint. For the flowers, he applied such thick globs of paint that they project out from the canvas’s surface, but he painted the water so sparingly that you can still see the texture of the canvas underneath. Compare the drier application of paint in the water, the thick application of paint for the flowers, and the lively swirls of paint in the plants on the bank.

Monet often used a brush made of stiff bristles; in some places, you can see the mark of the bristles in the paint. He also used a softer, rounded brush in places where the paint rises up from the canvas.

Monet said in 1905 that he only uses five colors: cadmium yellow, vermillion (a red), cobalt blue, emerald green, rose madder deep (a pink), and silver-white. While we don’t know for sure that Monet only used these five colors in this Denver Art Museum painting, it is entirely possible, as Monet made that statement only a year after finishing it.

Monet felt that black had a dulling effect, so instead of black, he used a color’s complement to darken an area. You can see reds laid into the greens in the darkest part of the water.