Students will examine Jeffrey Gibson’s parfleche (pronounced “par-flesh”)-inspired artwork Freedom, and explore how it might express his identity. Students will learn about the art concepts of geometric shape, color, and scale by creating their own artwork using materials of their choice to express something about their own identity.

Relate and Connect to Transfer

○ For management purposes, it may be best to create media stations for painting and using pastels or markers in your classroom. For painting, it is helpful to have out a couple of bowls filled halfway with water, a number of paint palettes, paper towels, various sizes of paint brushes, and liquid tempera paints or tempera cakes. For markers, have several of each color accessible to students. For oil pastels, have several small boxes filled with an assortment of colors available for students to draw with. This will allow students the creative freedom to choose their media and to experience more flexible seating. Try to have the stations set up prior to students entering the classroom for ease of management; otherwise, you should set up stations while students are playing “Ten Times Two” or “The Elaboration Game.”

○ You can also give students sticky notes and allow them to attach written feedback to pieces that inspire them.

Sketch paper for planning and/or student sketchbooks, if used in art class 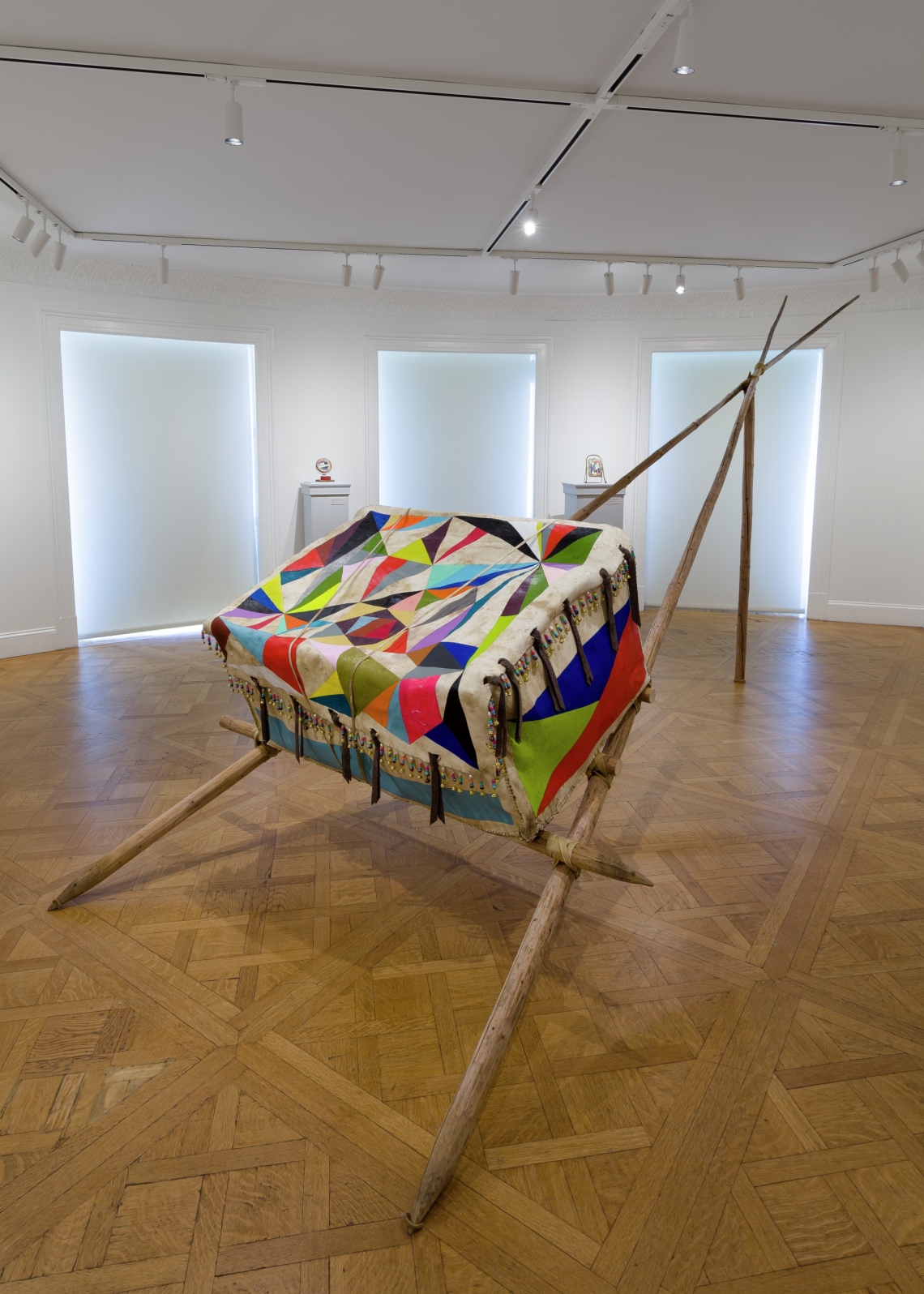 Jeffrey Gibson is a contemporary artist who was born in Colorado Springs, CO in 1972. He is a citizen of the Mississippi Band of Choctaw Indians, like his father, and his mother is Cherokee. His father worked for the government, and Gibson spent time in Korea and Germany as well as the United States while he was growing up. After getting his B.F.A. from the Art Institute of Chicago in 1995, he also spent time in London to earn his M.A. at the Royal College of Art. He now lives and works in Hudson, New York, and produces paintings, sculptures, and performances that draw on his Native heritage, abstract art, music, club culture, fashion, literature, and politics. He says, “I make my work with respect for tradition, but in no way do I claim that what I’m doing is traditional…I’ve tried to remain true to and honor the circumstances I was born to, and I’ve made the best work I can.”

Gibson says, “I try to begin each new body of work with a month of just experimentation, with no end product in mind. This is crucial and allows for the processing of previous bodies of work, but also opens up new directions for current and upcoming projects.”

For this work, Gibson bound together tipi poles with rawhide strips that were put on wet and dried, tight, in place (also called lashing together). As for the trunk, he cut, folded, and sewed buffalo hide into the shape he wanted. He then drew the geometric designs onto the surface of the box, and added in the colors with a brush. Gibson started out with larger blocks of color painted in triangle, square, and parallelogram shapes, then broke these up by adding more shapes in different colors on top of the initial forms.

The structure of this sculpture was inspired by the parfleche (pronounced “par-flesh”) containers and travois (pronounced “tra-voy” or “trav-wa”) that were used by Native American tribes from the Plains. A travois was typically made from tipi poles, and would have been pulled by a horse or dog. Nomadic tribes used them to transport their belongings, which were often stored in parfleches. This word is thought to have come from the French words for “to parry (defend),” parer, and “arrow,” fleche, and originally referred to rawhide shields or body armor. “Parfleche” eventually came to be associated with rawhide in general, and envelope-shaped rawhide containers in particular (to learn about one of these traditional forms and how it was made, click here). For this sculpture, Gibson constructed an oversized travois out of repurposed tipi poles, and an oversized, trunk-like, buffalo hide parfleche container that he painted with acrylic.

Gibson drew on the structures of Native American rawhide containers and travois when he created this sculpture. This work also reflects other inspirations he often references in his art: geometry used by twentieth-century abstract painters such as Sol LeWitt and Frank Stella, and the painted geometric designs found on historic Native American parfleches. Gibson first discovered parfleche bags as an undergraduate student, when he interned at The Field Museum in Chicago helping various Native tribes conduct research into the North American collections. Originally, he was more interested in the form and function of parfleches. After starting to seriously research them a few years before he made Freedom, he came to appreciate the painted aspects of them, and made connections between their designs and Western abstract art. “Only after researching more about the geometric abstractions found on parfleches did I find out that, traditionally, these were painted by women only. I came to appreciate parfleche painting as an artist, comparing the designs to modernist geometric abstract painting.”

The parfleche also had a very personal meaning. He said, “Having grown up moving around my whole life provided personal experiences that have caused me to identify as somewhat nomadic . . . always questioning what ‘home’ is defined by. I have become comfortable moving and have found great freedom in that ability.”

Gibson intentionally made the travois and parfleche elements of this sculpture bigger than they normally would have been in their traditional forms – especially the parfleche. He describes it as “extraordinarily huge,” and says, “I wanted it to be outsized…”

As an empty vessel, the parfleche stands as a metaphor for the things both physical and psychological that we carry with us and contribute to our sense of self. What do you think the large scale of this parfleche says about those things for most people? What would you include in yours?

Gibson created the geometric designs seen here by first drawing large triangle, square, and parallelogram shapes onto the hide, then filling them in with acrylic paint. He then layered smaller, different colored shapes on top of the original forms.

Gibson began painting on rawhide instead of canvas when he collaborated with other Native American artists for an exhibition in 2012. Artists would send him rawhide objects they had made, such as drums, and he would paint designs on them. He says, “I like the idea of having to care for something and that each hide is unique unto itself. There are marks in the hide from the life of the animal but also from the processing of the hide. And then when I painted on it, I was hooked.” Gibson likes the smoothness of hides, as well as the fact that they can be bent and folded into different shapes, and they retain the shapes when they harden.

Gibson uses materials that are not traditionally seen in fine art, like beads and fringe. These materials come from the world of craft, which has historically been looked down upon as “lesser” than fine art. Gibson busts apart that distinction once and for all in a way that also honors the long tradition of handmade objects in Native cultures.