Students will tell a story or recount an experience that they believe has importance and relevance to contemporary society and their community. Students will support their opinion with appropriate information and follow an age-appropriate writing process. 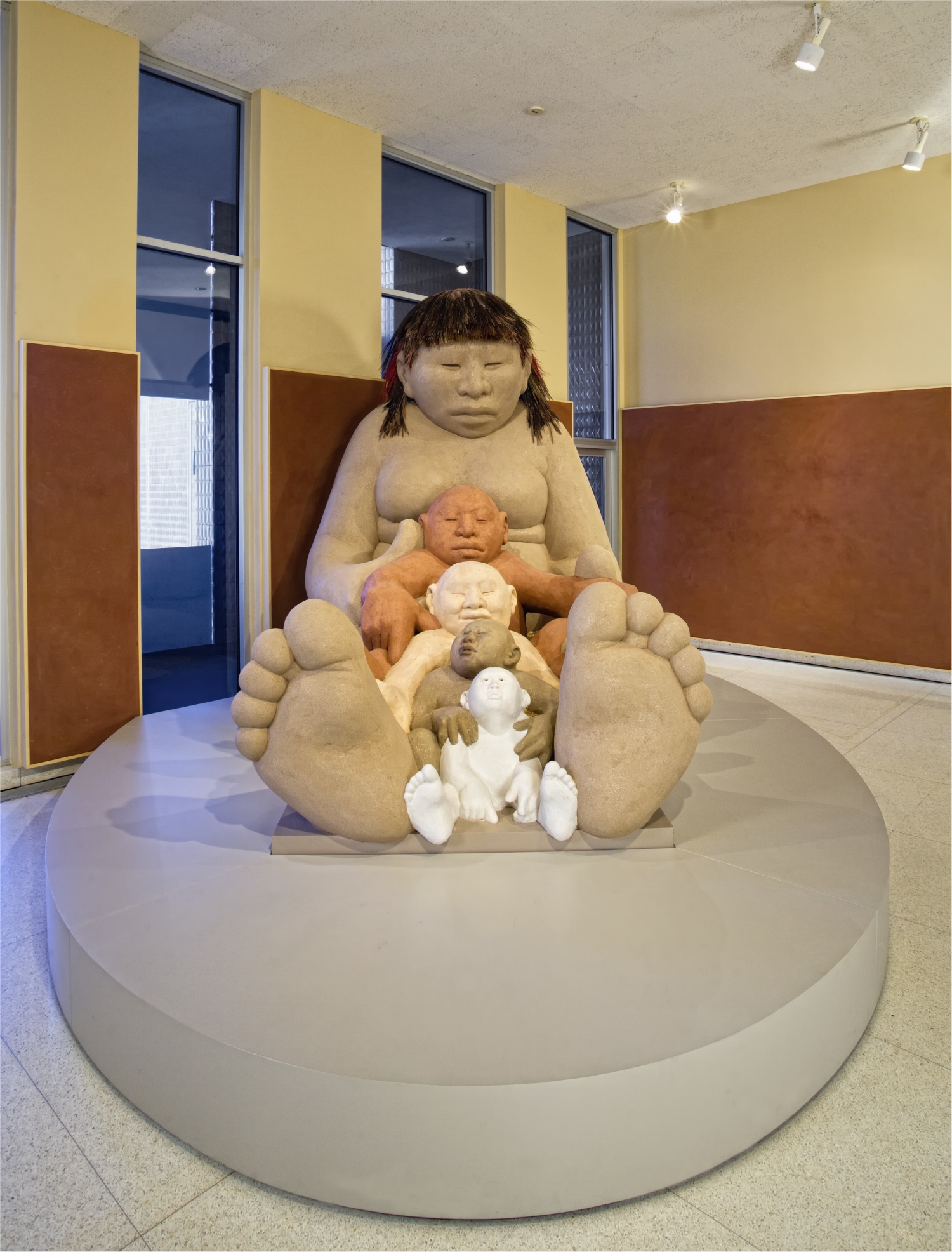 Roxanne Swentzell was born in Taos, New Mexico in 1962. Her mother was a potter, writer, and scholar from Santa Clara Pueblo, and her father was a New Jersey native of German descent who was a philosophy professor in Santa Fe. Growing up in Santa Fe, in a household that was filled with clay and artwork, Roxanne took to art-making at an early age. As a child, she struggled to express herself verbally. In order to let others know how she was feeling, she would sculpt small figures that represented her emotions.

Roxanne attributes much of her success to guidance from her family, particularly her mother, Rina, and her uncle, Michael Naranjo, a blind sculptor. From 1978-1980, before graduating high school, she attended the Institute of American Indian Arts.

Today, she spends much of her time at Tower Studio, twelve miles north of Santa Fe. Continuing her interests in nature and preserving the earth, Swentzell founded the Flowering Tree Permaculture Institute, “a research and education organization that relates to permaculture…a way of looking at the world based on the laws of nature.”

Swentzell believes that it is extremely important for her work to have a direct connection with reality. Her art must be a full expression of herself and her experiences and observations of life. She says, “I learned to listen to myself and not be so influenced by what other people wanted me to make. I am going to present the world through my eyes—and not as somebody told me I was supposed to.” She also aims to communicate with all people through her artwork—both Native and non-Native—about the things we share as humans. “With my sculptures I try to reach people’s emotions so they can remember themselves,” says Swentzell.

I propose creating a piece that is made from different forms of “mud.” A large female figure holds a few smaller figures (her children). This style of figure is known as a Storyteller. Pueblo Storytellers are about how knowledge is passed down through generations.

This piece is telling us a story; a story about generations and our connection to the Earth.

When asked to create a piece for the entrance of the Native American Exhibit section of the Denver Art Museum, I wanted to start the viewer off with a perspective of Earth and Mother. Having a “Mother” made of mud/clay starts the exhibit off in an appropriate beginning to our Native world. To have human figures made of clay is in itself part of the theme. We are all from this Mother, all from this Earth: made of her and will return to her.

The Storyteller will be in the form of generations. The Mother holds the largest child, who’s holding the next child, who’s holding the next and so on. I love the perspective of understanding that we all come from the Earth, generation after generation; an endless family of life passing on the seed. (Which itself is a story written into our genes.) We are the mothers of the next generation and the daughters of the last. Male or female........in the Pueblo world, we are “Mothers” (nurturers) of the generations to come in a world that supports life. It is always good to remember…to nurture life, for it is our work now as it was for our parents and ancestors that came before us and it will become the work of our children. When we nurture life, we take care of the Earth and each other so life itself can continue.

I will mix the medium of the piece with raw unfired mud plastered over a basket-like structure with parts of the features sculpted with fired earthenware clay. Some of the mud will have straw in it, and other parts, different clay pigments to create color. I find these different forms very interesting to create as an artist and also I love the thought of creating a piece that could actually melt down into mud if dumped into water. Just as all of us will return to the Earth, so will this Mud Woman one day…purposefully. To create a fine arts piece for a Museum out of raw mud creates a new consciousness in the world of art and links two very different cultures, the Western World with the Native American world. I am very excited to help to make this bridge.

As the “Mother” figure is very large, the children will be more human size. This helps the viewer relate to the Mother as their Mother and the children as themselves. From this perspective the viewer sees their place in creation clearer. They view themselves in the context of generations from the beginning of time into the future, all connected. To hurt one part of the chain of life is to disrupt the flow that nurtures the generations to come. I believe this story is certainly one that needs telling at this time.

Mud Woman Rolls On is a site-specific work of art. The DAM commissioned Roxanne Swentzell to create this piece as part of the opening installation of the new American Indian art galleries on the 3rd floor of the North Building. Roxanne started working on the piece January of 2011 and continued to work for the next nine months, traveling to Denver from New Mexico to work for three or four days straight once or twice a month. Swentzell completed the piece in September 2011.

Panels plastered with clay and enhanced with straw form the backdrop for this piece. The backdrop was created by Roxanne’s sister, Athena Steen, and her husband, Bill Steen. The Steens are authorities on straw bale houses and have created crossover art/architecture pieces for museums, as well as private clients.

Mud Woman is nearly 11 feet tall and located in the elevator lobby of the DAM’s American Indian art gallery. This is a permanent piece in the museum’s collection and the first object a visitor sees when they walk out of the elevator. It was important to Roxanne that this sculpture communicate a feeling of love to the visitors walking into the gallery and that people would be able to relate to the size of the sculpted children, who are being embraced by Mud Woman.

Mud Woman Rolls On was Swentzell’s first attempt at creating something larger than life-size. In order to build a structure so large, which would last a long time and support a lot of weight, Swentzell used straw wattles (long tubes of straw used most commonly for erosion control) for the base of the sculpture. Using a straw base is a standard practice for adobe construction and using flexible wattles (instead of rigid, square-shaped straw bales) allowed Swentzell to “coil” the tubes in a way very similar to how she would coil clay. If you look closely, you can see where some straw is still exposed.

Mud Woman is holding four children and, in turn, each of the children are holding one another. This idea of the mother (nurturer) with children around her is based on the Pueblo Storyteller tradition and was an important inspiration for Swentzell. As she explains in her artist’s statement, “Pueblo Storytellers are about how knowledge is passed down through generations.” It is also interesting to note that this project took nine months to complete, the same amount of time it takes for a child to be born.

Different Colors and Types of Mud

The mud (a combination of dirt, sand, straw, and water) used to make this piece comes in a variety of colors. Roxanne Swentzell carefully selected the type of mud to use for each of the figures based on their look and their location. For example, the second smallest child is a grayish green and the dirt used to make the mud that covers this figure came directly from an area behind the train station in downtown Denver. Other mud ingredients were either purchased or dug up from areas surrounding Santa Fe, New Mexico. When looking at the sculpture up close, one can see the subtle sparkle of micaceous clay that covers the surface of the mother figure. All of these examples were meaningful choices made by the artist.

Swentzell used a variety of different grasses, dyed different colors, for Mud Woman’s hair. This feature emphasizes that Mud Woman is made entirely of organic, natural materials. In this detail, you can see how the ends of the “hair strands” are shafts of grass.

Roxanne Swentzell often infuses her sense of humor into her work. This particular detail shows where Roxanne chose to write her signature. When visitors walk around the piece and find this detail, most think it is delightfully “cheeky.”