Students will examine Remington’s The Cheyenne and identify the challenges he faced in creating a horse that appears to be airborne. They will then work with a partner and go through a similar problem-solving process to create their own airborne sculpture. 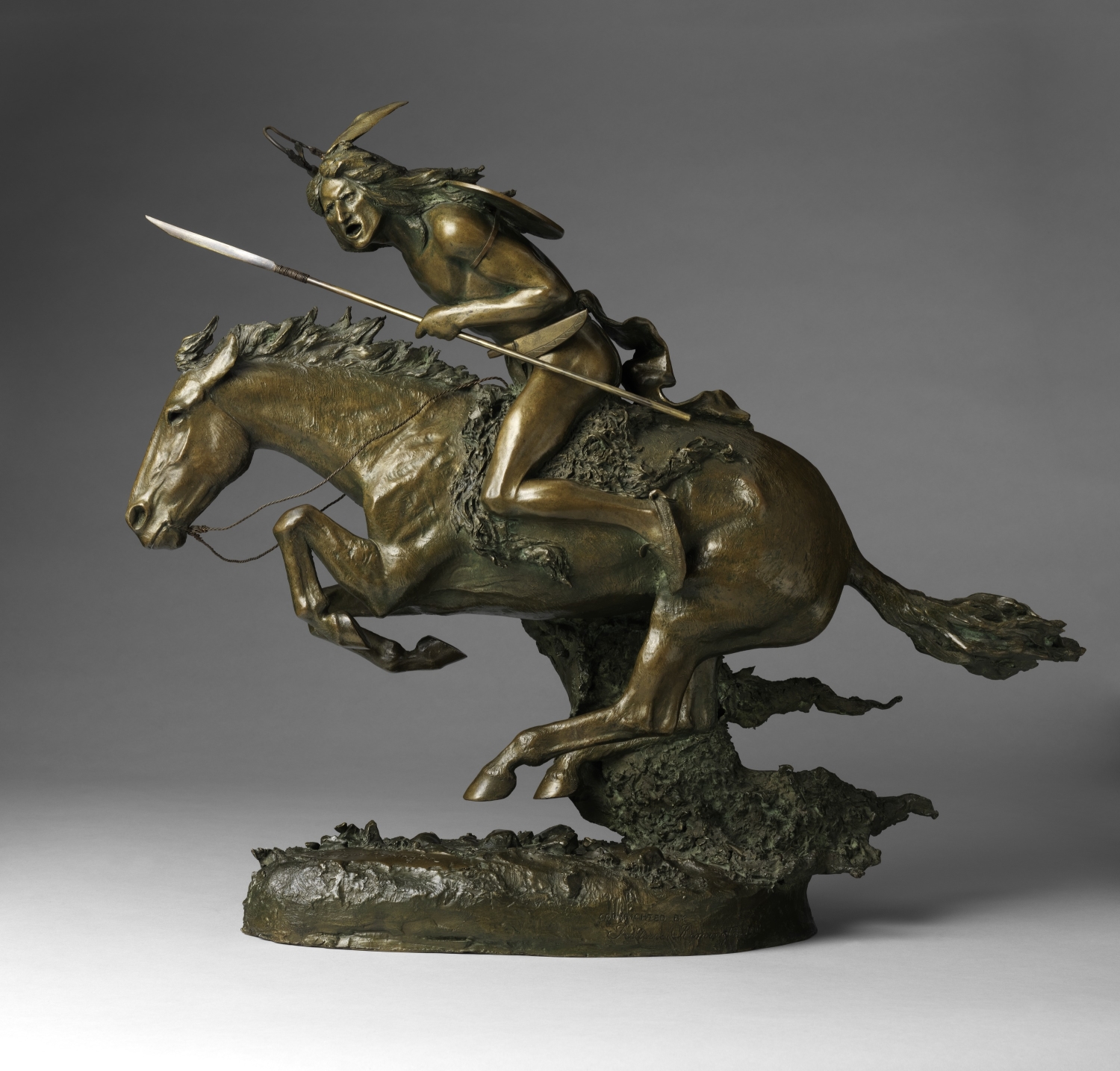 Frederic Remington was born in Canton, New York, and attended the Yale School of Art, where he studied drawing and played football. When he was twenty years old, he traveled west for a vacation and mailed a rough sketch to Harper’s Weekly magazine, kicking off his career as an illustrator. He had tried his hand at sheep ranching in Kansas, but after a couple of years returned to New York, making trips west from his home in the East. Most of his work was created in his studio in New Rochelle, New York. Remington’s artistic career began with painting and drawing, but a friend encouraged him to try his hand at sculpture in 1895. He made 24 sculptures in his last 14 years as an artist. Remington liked the permanence of bronze sculpture: “My water colors will fade—but I am to endure in bronze,” he said. He died at age 48 at the height of his career.

Remington felt compelled to record an American West that he believed to be disappearing. He loved to portray the action and energy of the West and did not feel confined by what were considered the limits of the bronze medium. In this sculpture, Remington has defied the traditional means of supporting sculpture, making the falling robe a part of the action. The horse and rider are full of energy and appear to be moving quickly. Remington often worked from photographs to achieve this authentic image of motion. To create this bronze sculpture, Remington used a method called lost wax casting. A “cast” is a form that is created by pouring liquid metal into a mold. Although it is over 6000 years old, the lost wax method had been newly introduced in the United States during Remington’s time. The process involves six different steps—during each step a new model of the sculpture is made. Lost wax casting allows the artist to make quick changes and fine-tune the wax model before each pour. Remington took advantage of this opportunity for experimentation, and often visited the foundry that produced his casts at this stage. His additional artistic input is evident in the Denver Art Museum’s sculpture, especially in the textures and color of the piece.

Compare the smooth skin of the Indian to the rippled musculature of the horse’s flank to the high relief texture of the buffalo robe. This sculpture shows the texture variation that was possible using the lost wax method, and it is evidence that this cast received a great deal of personal attention from the artist.

The golden honey color of this particular cast is much lighter than other casts of The Cheyenne, which may be evidence that Remington himself was involved in selecting it. He usually preferred a blue-black patina, so this was probably an experiment.

Four Hooves Off the Ground

In 1878, Eadweard Muybridge’s (MY-bridge) photos of racehorses in motion proved that all four hooves leave the ground at one time. Wanting to show this in bronze, Remington added a buffalo robe falling toward the ground as a support for the flying horse.

Muybridge’s photos also revealed another misconception: in their off-the-ground position, the horse's legs were bunched together under the belly, rather than in the “hobbyhorse attitude,” with front legs stretched forward and hind legs backward, which was traditional in painting. In using this pose for The Cheyenne, Remington was one of the first artists to take advantage of this new information.

The horse’s mane and tail add to the sculpture’s sense of motion—they appear to be blown back by the wind.

Remington’s signature changes location from cast to cast. On ours, it appears on the base.