Taking inspiration from the printed fabrics used in the Pratt Family Album Quilt, each student will create their own printing block and five prints. They will then swap prints with other students. After swapping prints, each student will assemble a quilt that is unique and personal. 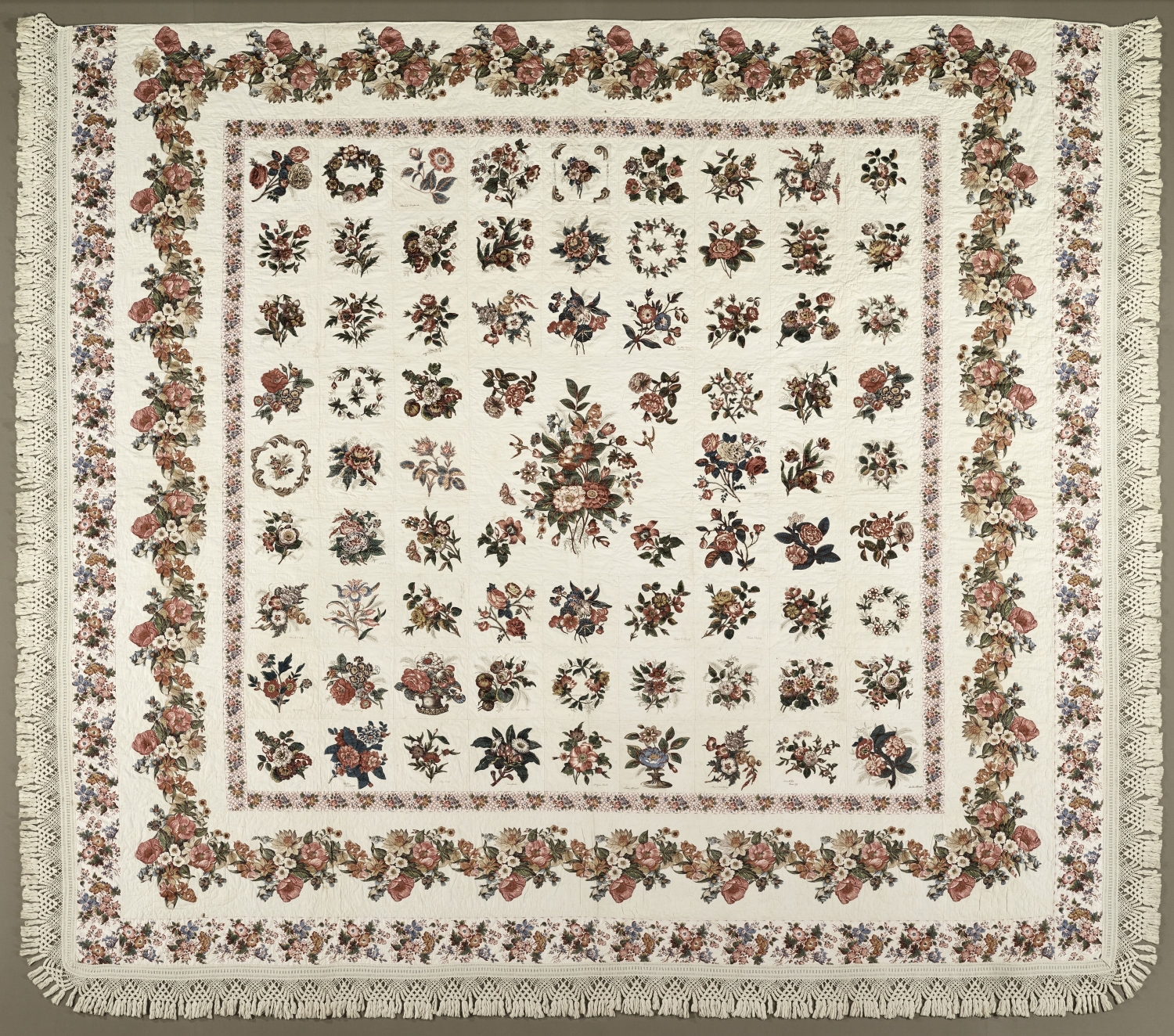 This signature quilt was made as a wedding present for Anna Eliza Pratt (1823–1895), granddaughter of one of Philadelphia’s leading merchants, on the occasion of her marriage to Lewis Perrine. Each well-wisher whose name appears on the quilt gifted a block (an individual square of quilted fabric), but the identity of the skilled maker is still in question. We do know that the quilt was made in the Delaware River Valley and is dated September 15, 1842 (a date of 1843 also appears on the quilt). Each block contributed to the quilt is different. To create bouquets, flowers were cut out from printed cottons, assembled into a design, and hand-stitched to the background fabric. This method of stitching one piece of fabric onto another is called appliqué. The Pratt Family Album Quilt displays elaborate cutting and appliqué techniques, and many of the blocks have fine details drawn in pen and ink.

Signature quilts were made to commemorate an event such as a wedding, birth, or major move. This quilt was made to celebrate the marriage of Anna and Lewis Perrine. Signature quilts became popular around the 1840s. When making a signature quilt, friends and family would sign their names and possibly a date, location, religious verse, or other token of remembrance as a way of expressing friendship for the recipient, not as a way of identifying their own workmanship. The names on the quilt were meant to remind the recipients of their friends and family; signing the quilt was like signing a card today. Women would sign with ink, demonstrating their elegant handwriting and creating a diverse array of handwriting styles on the quilt. It was very difficult to write on cloth, however, so signatures were not always written by the person named. Sometimes signatures were written by a professional calligrapher, and sometimes simply by the person with the best handwriting.

The block in the center of the quilt is larger than the rest and contains a large bouquet of flowers with four smaller flowers in each corner. Also in the center is a butterfly and what look like two hummingbirds. The large bouquet is set on white cotton with interlacing circle, leaf, and line stitches.

Some of the finely detailed leaves, flowers, and what appear to be sheaves of grain were hand-drawn with ink. All of the hand-drawn details are monochrome (one color) and surround the more colorful bouquets.

The signatures of well-wishers can be seen in the corners of many of the blocks.

There are four borders, or outlines, on this quilt. The inside border that surrounds the individual blocks is the narrowest border. It is made from a flower and lattice fabric and applied whole and not as cut-outs. The next border is made up of printed fabric that is cut and appliquéd. Outside of the appliqué border is a fabric border of flowers and leaves. The fabric for this border is used whole and not as cut-outs. The final border, which surrounds the entire quilt, is made of lace.