Rita Flores de Wallace will be in the Flower Studio August 29 and 30, and September 5 and 6. Check out the video and read below to learn more about Rita and her work.

Rita Flores de Wallace grew up in Galeana, both a municipality and a city in the Mexican state of Nuevo León. Rita’s early years were very domestic; she was the oldest girl in her family and played a large role in taking care of her nine siblings. Her house was always filled with people, giving Rita many responsibilities. At age nine, she went to school to become a secretary. During her training, the nuns who served as instructors taught young students the domestic arts, including embroidery and weaving. Around this time, she also started practicing with a dance group called Balet Coafiuiltecs. They practiced at night and over 12 years developed their group. To compete in Mexico City, the group had to show new dances, music, and costumes.

Rita met her husband through a secretarial job at a summer university and moved to Denver in 1979. She began teaching dance in Denver, coordinating all the dances and making the costumes. Colorado folklorist Bea Roeder became very interested in Rita’s embroidery skills. Roeder was a big influence for Rita and one of the first to recognize her as an artist. Throughout her years in Denver, Rita has practiced Mexican folk arts including doll making, weaving, embroidery, paper art, and more. She has won many awards and her work has been shown all over Colorado. Group Tlaloc recently awarded Rita at their annual conference in La Raza Park and presented her with “The 2015 Xupantla Leadership Award."

Rita recently helped the Denver Art Museum get ready for In Bloom: Painting Flowers in the Age of Impressionism by creating paper flowers and decorations for a Create-n-Take activity. Rita learned to work with paper in her early childhood, often making paper flowers to decorate her home. She later worked with a famous Mexican paper artist in Denver where she fell in love with the craft.

This video (produced by Mireya Rodriguez and Erin Cousins, two interns at the DAM) is in Spanish with English subtitles. Rita speaks English and Spanish, and speakers of all languages are welcome! 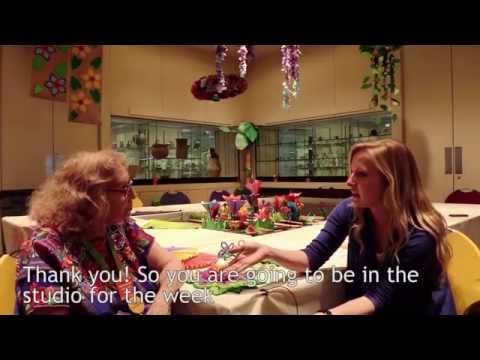 Ariel Spiegelman was an intern in the department of learning and engagement at the Denver Art Museum. She is getting her master's at the University of Texas in Austin in art education, and her favorite monthly event at the museum is Untitled Final Fridays.